Remote sensors measure radiation levels in nuclear power plants and carbon monoxide levels in parking garages. They report floodwater levels in rivers and seismic activity along fault lines. They collect huge quantities of data all over the world, and none of it is useful until it has been read and interpreted. Additionally, much of this data needs to be reported in real time so that human beings can make appropriate responses before environmental disasters unfold.

But many of these remote sensors need to do their jobs in locations that make it difficult or impossible to provide wired data communications connections. That problem can be easily addressed with cellular routers, which can create Internet connections anywhere there’s cellular coverage. Cellular routers provide plenty of bandwidth, even for video applications, and they support robust security protocols and virtual private networking (VPN). They can also make use of wired connections when they are available, using the cellular networks for automatic failover if the wired network should go down. This provides redundant backhaul for users like the nuclear power industry, where downtime could mean disaster.

Volcanic eruptions in Iceland can interrupt flight schedules and cargo service all over Europe. It’s important to have advanced warning when these events begin. So the Icelandic government and the European Union have installed a variety of sensors to monitor Iceland’s live volcanoes. Seismometers look for ground motion. GPS sensors use satellite technology to detect movements in the earth’s crust that indicate magma build-up below. Sensors can even detect “inflation”, the curving of the Earth’s surface around volcanic sites that indicates magma build-up.

All of these devices need network connections. But – thanks to lava flows, ash fall and earth tremors – installing and maintaining a reliable cable run on a live a volcano would be a very expensive proposition.

The Icelandic Meteorological Office installed cellular routers. The cellular routers aggregate input from multiple generations of sensor technology and they don’t need cabling to transmit the data to the control center. 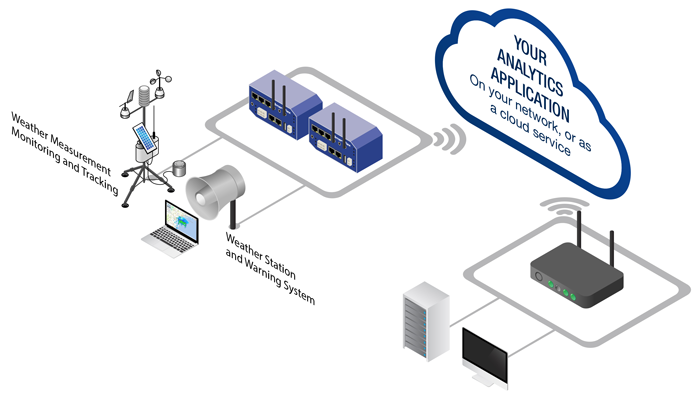