The concrete curing process is affected by factors like ambient temperature and external moisture levels. Removing concrete forms before concrete is properly cured can lead to deformation, which would force the builder start over again at the beginning. But leaving concrete forms in place when they are no longer needed is not only an inefficient use of the forms themselves, it slows down the entire project by preventing workers from moving on to the next steps in the construction process. Embedded, disposable sensors can measure temperature to indicate when the concrete forms will no longer be needed. But how, and where, do these embedded sensors report their data? A system integrator in Ireland used the Wzzard Intelligent Sensing Platform from B+B SmartWorx to resolve that very problem.

Connecting industry standard sensors to Wzzard Intelligent Edge Nodes allows those sensors to publish their data to a controlling application, which may be on a local network or in the cloud. In this case, the embedded sensors were small and inexpensive, and could simply be left in place when the concrete finished curing. During the curing process, the Wzzard platform created a complete connectivity stack between the embedded sensors out at the construction site and the monitoring application on the builder’s network. It used two pieces of IoT technology to do so; wireless Wzzard Intelligent Edge Nodes and the SmartSwarm Gateway.

The Wzzard Intelligent Edge Nodes connect to new or pre-existing industry standard sensors, read their data and wirelessly transmit it to the SmartSwarm Network Gateway. Every node has routing capabilities, so they are able to form extremely reliable, highly scalable, self-sustaining wireless mesh networks. Individual nodes need not be within wireless range of the gateway, as they can route the data across fellow nodes until it reaches its destination. The SmartSwarm Network Gateway then provides secure network connectivity via either wired Ethernet or cellular data connections, with automatic fail-over. 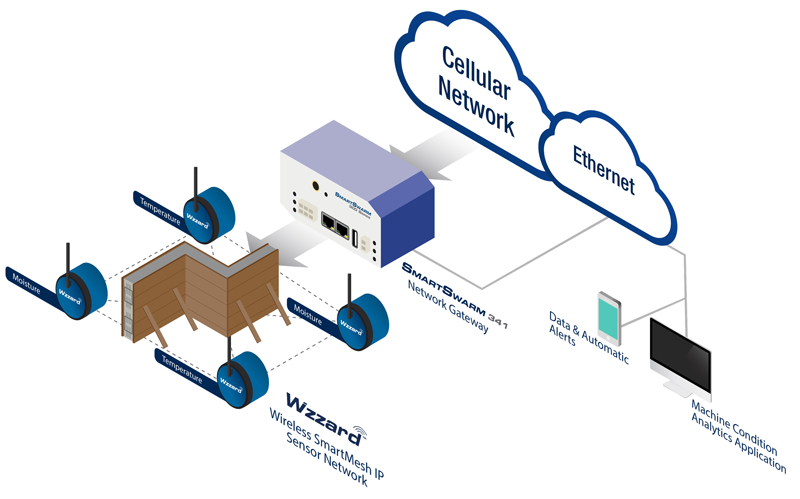 Benefits Enabled by the Wzzard Platform