Cellular and the Promise of SWARM Intelligence 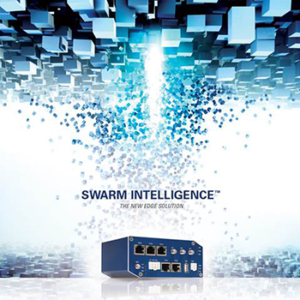 The use of cellular routers in industrial applications has become commonplace.   From applications including business fail-over and redundancy, to remote asset management and cable replacement; the cost of using cellular routers has been driven by an ROI based on one technology choice vs. another.    One brand vs another.

Pull the datasheets from the websites, compare features, price and select your carrier data plan.    For a single point in time application, this can make perfect sense.     We have all seen the rapid evolution of products and services that use data gathered from edge devices, often connected via cellular, to deliver improved efficiency, cost savings, and optimized asset management.

Consider instead the router’s ability to give you that return on investment over an extended period of time.  What is your total cost of ownership?   Does your router include free firmware updates, long term free technical support?   As your network changes, can it adapt to host applications that reduce your data usage and data costs or are you faced with a rip and replace scenario?   More than ever, decisions you make to build your network today have to be made with tomorrow in mind.

Greater than the sum of its parts

With intelligence inside, cellular routers are also evolving to deliver more than M2M connectivity; they are becoming intelligent gateways with the capability to host applications and deliver significant data processing at the edge of network itself, reducing the need to haul data back and forth to a centralized hub.  This leads to a more responsive, resilient and secure network.    Intelligence at the Network Edge also provides an opportunity to organically grow the network, without the deploy-destroy-deploy or “rip and replace” process of replacing outgrown or obsolete equipment.

Finding a correlation in the natural world

The power of SWARM intelligence is visible in nature, where the collective efforts of very simple creatures like ants, bees and termites can produce highly sophisticated results. Termites build enormous mounds in which internal temperatures are regulated to within a degree, even when temperatures outside of the mound vary by 40oC or more.  Individual ants forage at random, but the overall motion of the collective produces highly efficient search algorithms that researchers have compared to those used in Google Maps. Bees successfully build and defend hives, forage for food, protect the queen, and raise their young, even though the drones themselves possess very little personal intelligence. Individual members of these collectives have no knowledge of the overall aims of the colony; they merely follow simple rule sets.  Yet the collective itself exhibits characteristics that are not present in its individual members.  The collective can almost be viewed as an organism in its own right.

The Relevance to Intelligent M2M and the Industrial Internet of Things

The same principles that make natural collectives successful can be put to work in data networking.  The sum of the knowledge embedded within thousands of relatively simple devices, if efficiently and effectively communicated between network nodes and applications, can produce benefits above and beyond those provided by the individual pieces of equipment.  This can help address the problems that occur out at the network edge.

With SWARM intelligence, an edge device does not have to be a single physical device, with implicit limitations on interfaces, resources and expansion.  Instead, it can be made up of a number of discrete physical devices, with each one contributing its interfaces and processing capabilities to the collective.  Together, these individual devices can then be viewed, in architectural and functional terms, as a single entity.

This approach solves the scalability problem which has been the “elephant in the room” when discussing previous edge architectures. Doing so results in a quantifiable reduction in the total cost of ownership of an edge SWARM compared to other current solutions.

Conventional edge devices are typically either relatively limited in their programmability providing, for example,  simple scripting support, or may require detailed user programming that requires a high level of familiarity with the device and its underlying hardware and software structure. SWARM devices support both scripting and detailed programming, but dramatically reduce the time and risks involved in business logic development by providing fully rewireable services, coupled to an ontology engine that allows services to be broadcast throughout the SWARM. User programming becomes, to a much greater degree, an exercise in the binding of trusted services and user modules, while also allowing for the extension of the available services and modules for inclusion in the local SWARM.

The generation of local business intelligence is further simplified by the provision of an internal continuous query engine, allowing users to filter and enrich underlying data passing through the SWARM by invoking calls using a comprehensive high level query language which includes the concepts of both time and number bound operations.

This combination of features dramatically reduces the time and risk involved in the development and deployment of the business logic, analytics or other user programming required at the edge.  This shortens the overall time to revenue for systems based on SWARM.

In traditional edge devices it is necessary to define the characteristics of the device prior to installation. Parameters may include the number and type of physical interfaces to be provided, the bandwidth of the processor, the amount of RAM and the persistent storage required.  This often leads to the deployment of devices that are more expensive than is really necessary, as a means of “future-proofing” the installation.  Even then, an installation may prove to be inadequate for some future task, calling for replacement with more advanced equipment, potentially also incurring costs for retest or recertification of the installation.

A SWARM edge is already future proof.  If a new interface is required, or if a new edge application calls for more processing power, memory or storage resources, additional nodes with the necessary features can simply be added to the pre-existing SWARM, with no effect on any of the existing interfaces or the applications built upon them. As new classes of device emerge, the SWARM will absorb and incorporate them, thus increasing the overall capabilities of the collective.

This means that deployed devices can be sized for the known requirements at the point of deployment, without risk to the investment being made at the time.

SWARM technology can directly reduce the cost of integrating remote sensors and devices. In a traditional architecture, where the edge is a single physical device in a single location, connecting each sensor or subsystem requires another cable run. That can be made even more expensive if trenching is required, or there is a need for armored or specialist cables. In a SWARM-based system, a wireless node is connected to a sensor or device. The node then makes its data available to the SWARM, which provides a wireless path to the network gateway. This makes a cable run unnecessary.

The ability to add and use new interfaces and resources, along with the routing capabilities built into each SWARM device, makes SWARM incredibly flexible.  It is easy to set up strategies to attach business logic to multiple interfaces, providing redundancy of outputs, or x-out-of-y voting on input data. Redundancy need only be added to those interfaces that truly require it.  This is far cheaper and far less complicated than creating redundancy by duplicating the entire edge.

Each device within the SWARM supports local configuration and management.  More importantly, SWARM also supports remote management from a central location.  This dramatically reduces the number of site trips required for system maintenance.

A SWARM reports the status of connected devices and allows for the download of user programs to both individual devices and groups of devices. User programs are deployed in protected containers within the edge devices, and no user program can negatively impact services, interfaces or programs that are running outside of those containers. If a user downloads a program that contains bugs, the program itself may crash.  But the edge device remains operational, and the user can remotely recover the situation.

SWARM devices also include the ability to support “zero touch” provisioning, automatically contacting a central server to obtain their initial configurations and user modules on initial power up. To bring an unconfigured SWARM device into service, the device need only be physically installed and switched on.  This reduces the number of operational spares needed to support a system, as standard SWARM devices can be substituted without any pre-configuration process.  Additionally, the installer needs no special skills.

Like a beehive or an ant colony, SWARM technology lets individual devices contribute their abilities to the collective, even legacy equipment that was never designed to be a part of the Industrial Internet of Things.  In doing so, SWARM technology provides massive scalability and the ability to easily integrate future, as yet undefined, interfaces and devices.  SWARM can drastically reduce the costs of application development and deployment, installation, commissioning and maintenance out at the network edge.